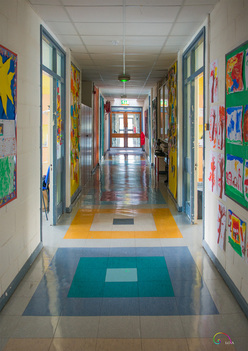 
Scoil na Mainistreach means the school of the Abbey.   The Abbey in question is Celbridge Abbey, which has historical links with Jonathan Swift.   The Abbey school functioned as the boys school for the town of Celbridge until the 1950s and as the town began to grow a new school was built on the Hazelhatch Rd. which was known as St. Patrick’s National School.  In 1977, in conjunction with another phase of development in  Celbridge, a new school was built on the Oldtown Rd.    This school was named Scoil na  Mainistreach.

The motto of Scoil na Mainistreach is “Mol an oige, agus tiocfaidh si”, which means “praise the young and they will flourish”.  Our school uniform consists of grey trousers, grey pullover, blue shirt and navy tie.  We have a special school tracksuit for P.E.


There is a great tradition of excellence in the school across a wide range of activities, sporting, musical, artistic, environmental. Gaelic Football and Hurling are fostered especially in the school. We also have tag rugby, basketball and a comprehensive P.E. programme throughout the school.   It must be said that most of the competitive activities of the school are carried out on an extracurricular basis, with phenomenal generosity from the teachers involved.   This applies to all activities sporting, quiz, musical and artistic in which the school partakes.

The school has been awarded 5 Green Flags for our efforts in improving and developing the school environment.  We are very proud of this achievement.

There are currently 47 members of staff, 32 teachers,11 special needs assistants, 2 secretaries ,one housekeeper, and one caretaker.   There are 401 pupils who come from 32 different countries, with the majority from Ireland.

We have very close links with community groups in Celbridge.   In particular, we have very close ties with the local Catholic Church as this is a Catholic school under the patronage of the Catholic Archbishop of Dublin.  Because of the sporting ethos of the school we have close links with the local clubs, particularly Celbridge G.A.A. Club , Ballyoulster and Celbridge Town Soccer Clubs, Barnhall Rugby Club and Celbridge Athletic Club to name but some.

A number of groups use the school for activities after school hours,i.e. Kickboxing ,gymnastics, basketball, adult art group, music classes,etc.